August 12, 2019
In Episode 13, Alex and Drew talk about a handful of different Independent Comic Books that we've read over the last few weeks! 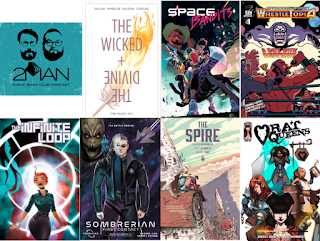 We tried to be as spoiler-free as possible, but some details were necessary to get the idea of the books across in hopes that you would look into them yourself!

We plan to do some deep dives into some of these titles, as well as many other Indie books in the future, but in this episode we just wanted to share the titles of some books we think you might want to check out!


And as always, if there is a comic series or topic you would like to hear us cover on the podcast, reach out to us on Twitter @2mancomicbook, or Instagram @2mancomicbookclub.

Popular posts from this blog

February 02, 2022
So here at the 2 Man Comic Book Club, we've released 100+ podcasts about comic books, superheroes, space fights, superpowers, tv shows, and time travel. I still can't believe it! As I've worked my way through more and more comics, I've started wondering how they all stack up.  What follows is by no means a detailed examination of each comic where I weigh their merits against each other. It's exactly what the title claims... a Gut Reaction Ranking . All I did to make this list was start with the first comic we covered on the show "X:Men - The Worst X-Man Ever" and put it at the top of the list. I moved onto the next one, "Superman: Secret Identity" and put it beneath Worst X-Man, because I liked the X-Men story more. (Can you believe that? Coming from me? A self proclaimed Superman fanboy for life!!??)  I then worked through the rest of the stories we covered on the show, comparing it to the list as it stood and placing the new story where I felt
Post a Comment
Read more

Episode 54: Breaking down WandaVision 1-3 with Nik!

January 25, 2021
In this episode we were really excited to have our friend Nik join us to break down the first 3 episodes of WandaVision. This ended up being a long episode, so buckle up and enjoy a really fun discussion of the new Disney Plus show! SPOILER ALERT!! If you haven't watched the first 3 episodes we strongly recommend that you watch them before listening to this episode!!!! We break down the episodes, look for Easter eggs, and discuss theories of what exactly might be going on in this blast from the past of a tv show. Once the video of this episode is edited I'll toss the link right here. In the meantime, it would also be awesome if you subscribed to our new YouTube Channel. This video will be available there soon...as well as some exciting new ideas for some shorter videos we plan to make soon! 2 Man Comic Book Club YouTube Channel   Is there a comic series you would like us to cover on the show, or a topic you would like us to discuss? We would love to hear from you! Find us on
Post a Comment
Read more

Episode 106: Marvel: Civil War & Episode 1 of a new podcast by Drew and Torrance!

February 14, 2022
Between car trouble and hectic schedules we weren't able to meet to record a normal episode this week. But we were able to record a few solo things that we wanted to share. So on today's episode, Alex starts with an intro into a "Discord Exclusive" offering of a Marvel: Civil War Read Along. Listen to what Alex has to say and then join the Discord to participate!  Discord!   https://discord.gg/mbMw2mxtUu After that, Drew presents an episode (20 minutes)of a new podcast idea he and Torrance have been planning for a long time. It's a fiction podcast, so if you like that sort of thing make sure to keep listening once Alex is done talking about the Civil War read along. This story is about a guy who's stuck in a basement and doesn't know why. He finds a tape recorder stashed behind a bookshelf and starts to chronicle the experience in hopes of being rescued one day.  If you enjoy the story, please join the Discord and let us know what you think. Would you be i
Post a Comment
Read more